Yaroslavl - a city in Russia, the administrative center of Yaroslavl region. Population - 595 155 people (estimated at 1 January 2012). Yaroslavl - the third largest populated city of the Central Federal District of the Russian Federation. The city is a transportation hub from which diverge railway line and highway in the direction of Moscow, Vologda, Rybinsk, Kostroma, Ivanovo and Kirov. In Yaroslavl, acting as a river port and airport. The city's area is 205 sq. km.

Yaroslavl is a one of the oldest Russian cities, founded in the XI century and reached its peak in the XVII century; in 2010, the city celebrated its millennium.

The historic center of the city, situated at the confluence of the Volga and Kotorosl, is a World Heritage Site. Yaroslavl is traditionally considered one of the main objects of the Golden Ring of Russia. Due to its rich past, the city has an interesting and diverse architecture. But diversity does not always play a positive role. New and relatively new development in Yaroslavl, like in most other Russian cities, ignoring the old environment, which was created for centuries. When entering into the conflict styles and scale, architectural environment loses its integrity, and, therefore, beauty. 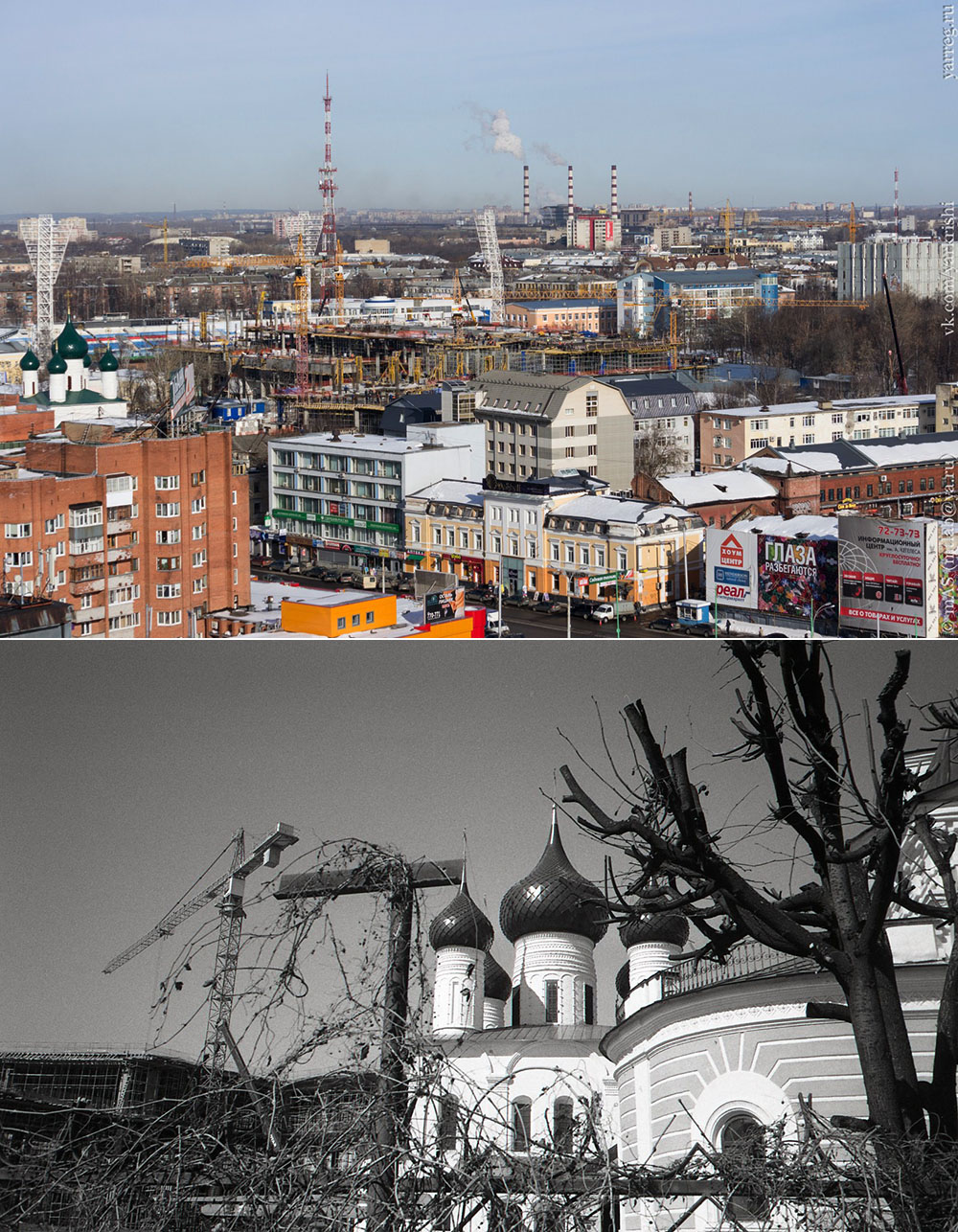 Cities are divided on the distribution of buildings of different styles and scales into two classes. The first are the cities with a layered structure - from the center to the outskirts of built-up layers can be clearly seen - from old to new. The transition from one layer to another is gradual and within a few layers is influenced by the other (examples - Vienna, Prague, Stockholm, St. Petersburg). The second class include the cities where the old buildings are replaced by new ones without regard to the homogeneity of the surrounding space (examples - Ekaterinburg, Cairo, Las Vegas). The difference in the aesthetic appreciation of cities of two classes is obvious.

Despite the protected status, Yaroslavl finally preparing to move to the second class. To avoid this, we need to take an action to establish in homogeneous spaces. Let's begin.

Each Yaroslavl building belongs to one of the five historical groups - from group A (oldest) to the group E (the latest). Each group contains objects that fits well with each other in the style and scale matter. Objects from different groups are combined in most cases are not so fortunate.

If you compare, for example, groups A and B, we can say that they are similar in the aspect of style (mostly variations of an order architecture), but differ greatly in scale (in the group is larger in scale, it is visually suppress anything that less). If we compare the groups B and C, it becomes apparent, and their stylistic (references to the order in the group C with almost no), and the scale incompatibility. Groups C and D - again vary in style and in scale. Finally, there is another group E, that might appear in the near future - filled with new aesthetics and takes into account the errors of the past (let's be optimists) architectural forms.

Pattern construction of different styles within the city 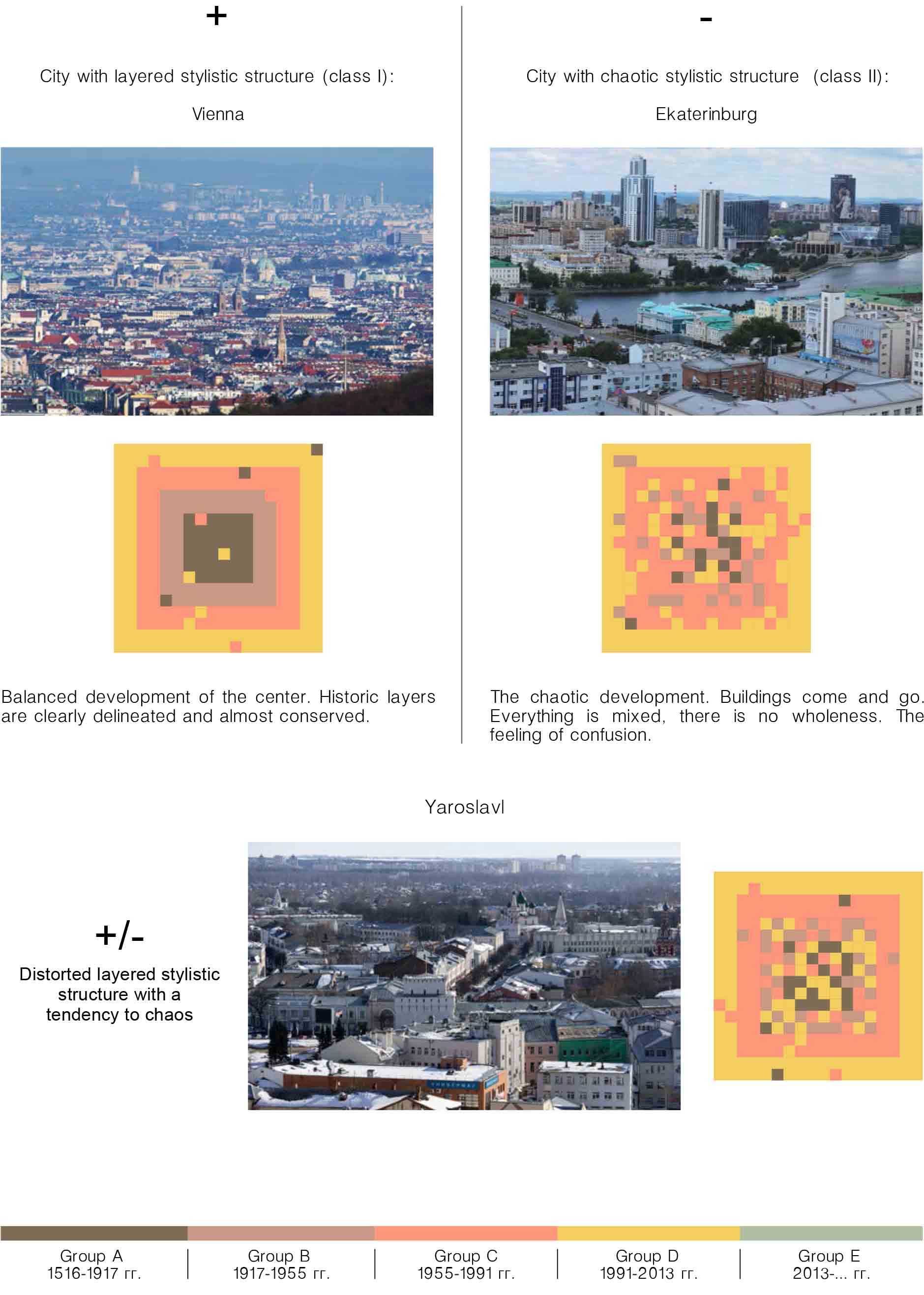 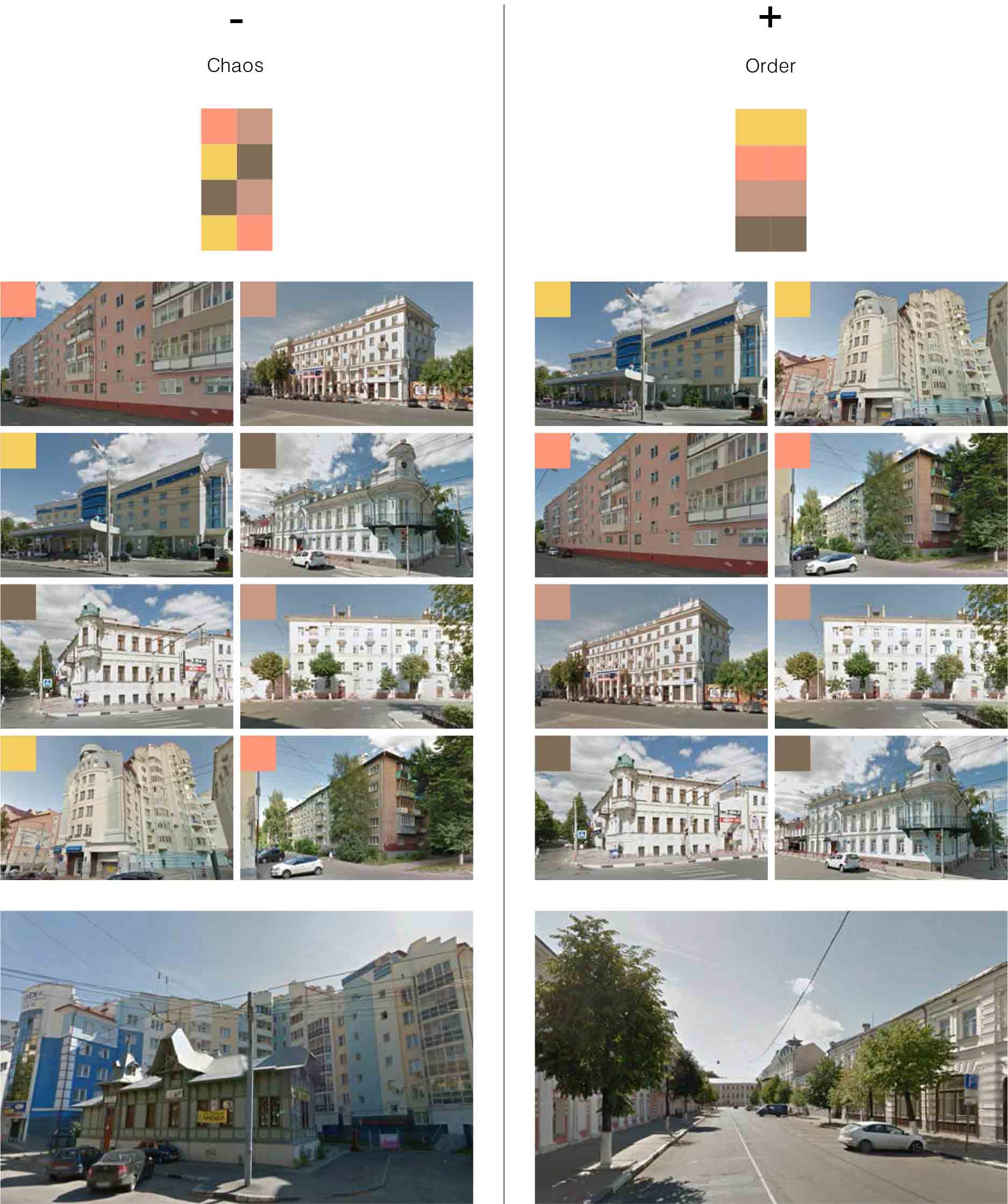 It's hard enough to explain why some buildings are compatible with each other, while others are not. But the fact remains - excessive heterogeneity often detracts from the beauty of the urban environment. 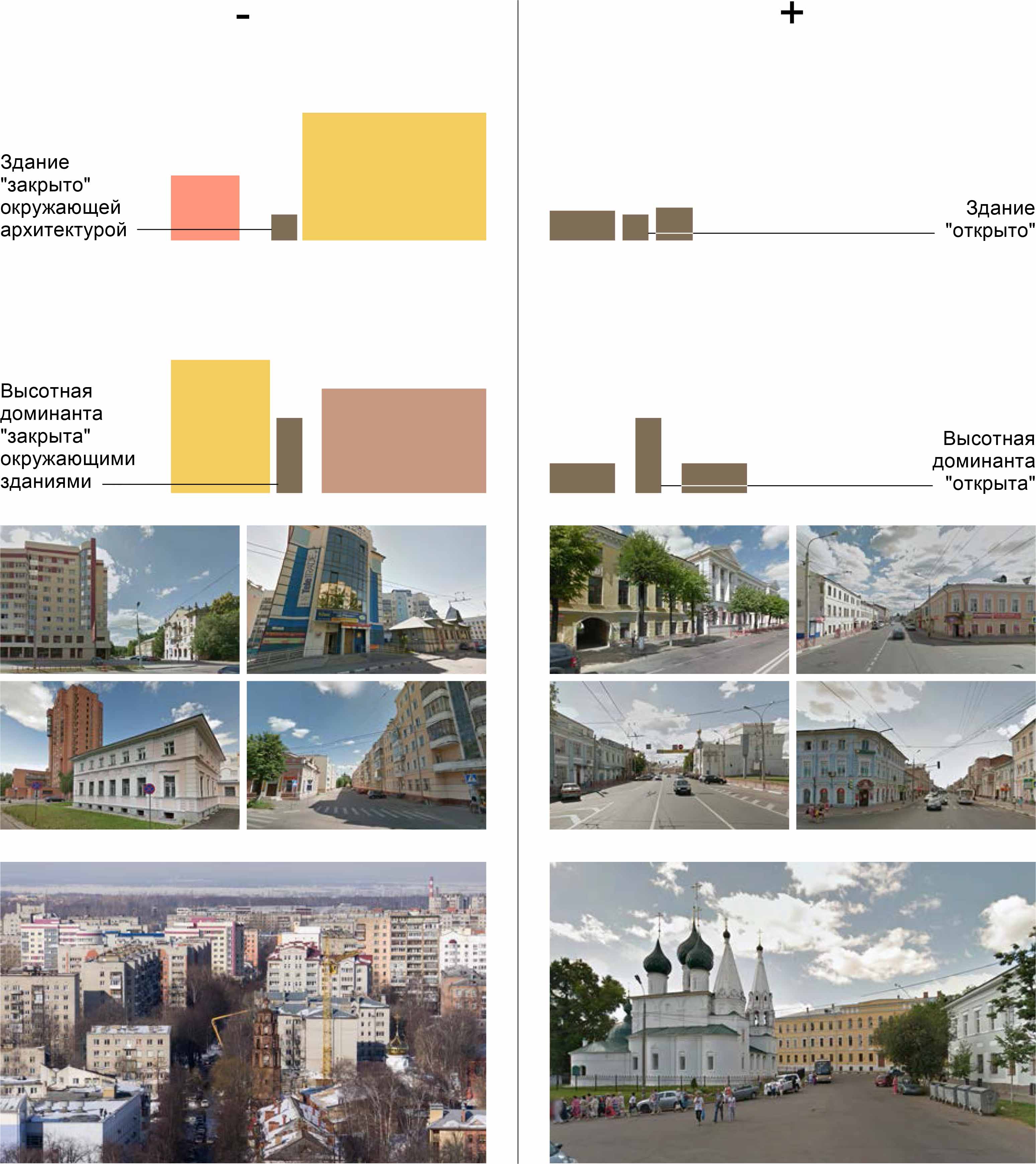 The most valuable architectural objects belong to groups A and B, the building in which have the smallest dimensions, and, consequently, the most vulnerable of the larger buildings of other periods. The strategy of homogeneous spaces creation involves not only stylistic, but also scale homogeneity. 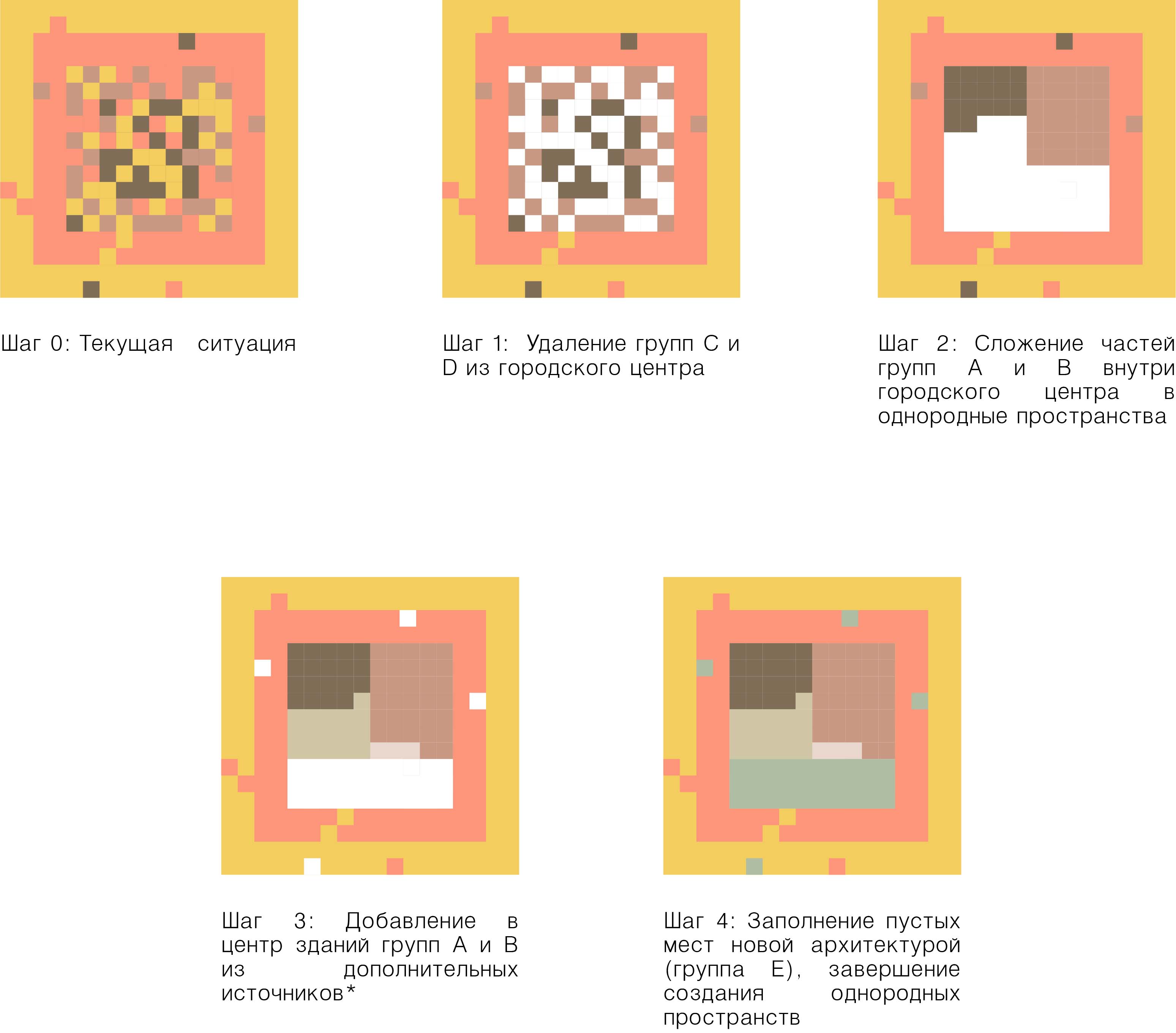 The above scheme is a step by step strategy to create homogeneous spaces. These actions are not only applicable to Yaroslavl, but to most Russian cities.
* - available in view of the following sources:
1 - the building of the rest of the city; 2 - mutated copies of the buildings of the same groups from other localities; 3 - previously unrealized projects of the respective periods; 4 - previously destroyed buildings.

In today's Yaroslavl there a stirred different groups and the lack of dominance by any one on a fairly large area. The blocks are not closed, building density is low.

Suffice it can be clearly seen that the "representatives" of each of the groups is in almost every quarter, which in most cases introduces an element of confusion and disorganization.

The final result. Groups C and D are removed, groups A and B are collected in homogeneous spaces, Group E added. 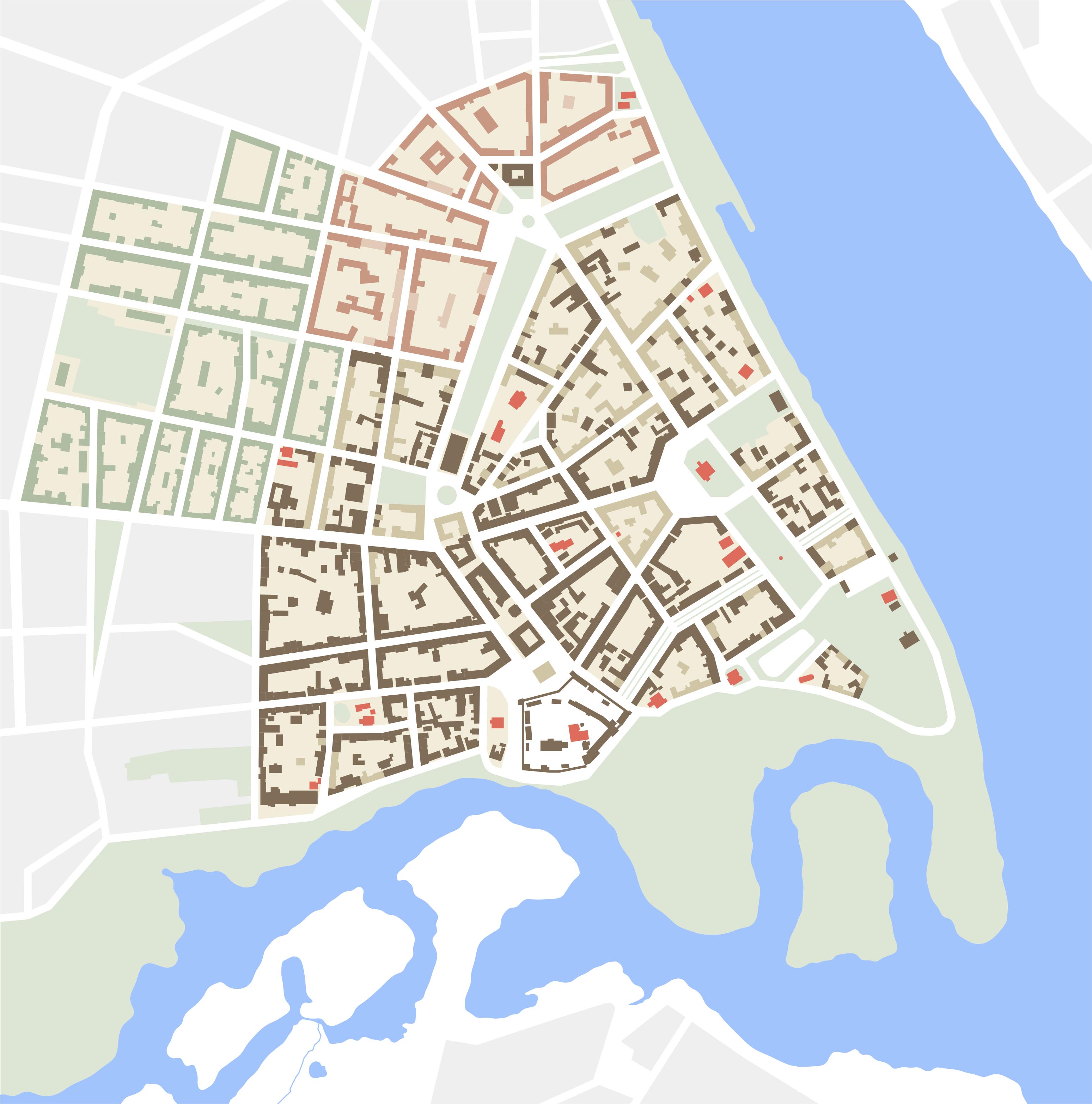 All information presented here is not an exact science and requires further work. The ratio of the buildings to a particular period was carried out only on the basis of visual analysis that allows some inaccuracies. Combining objects in space based only on the formal respect of a particular period and did not take into account their actual stylistic, functional and high-rise combination.

Some of the buildings within the designated area is not affected by the study period due to the uncertainty of construction or unavailable for visual analysis. 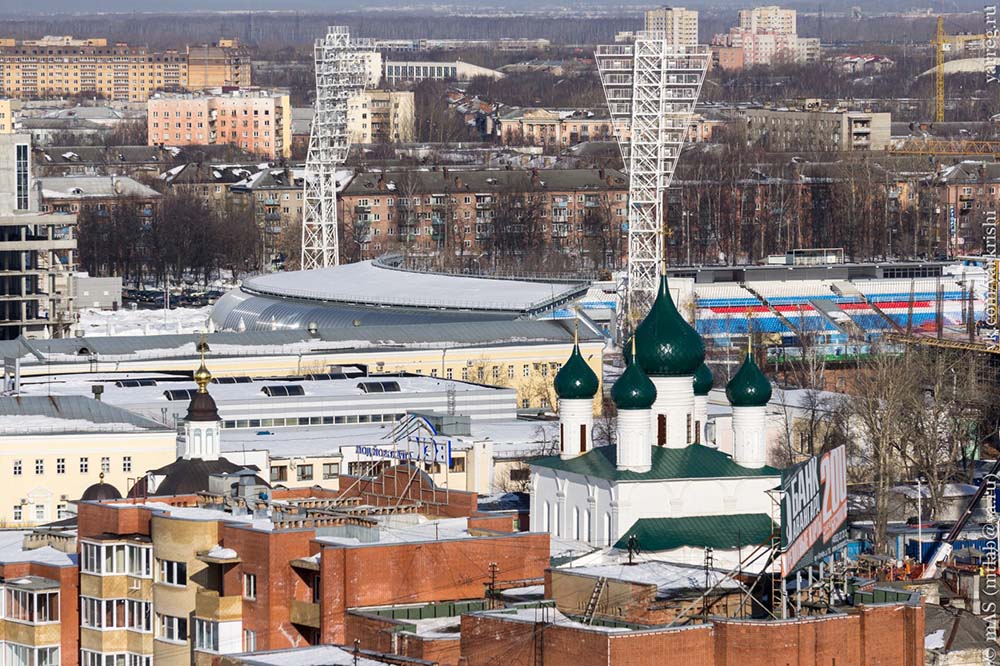 We're - Studio ATAMANENKO, ARCHITECTURE and INTERIORS
If you need a really qualitative architectural and/or interior object, please contact us:
+7 926 569 28 42 | y@atamanenko.com